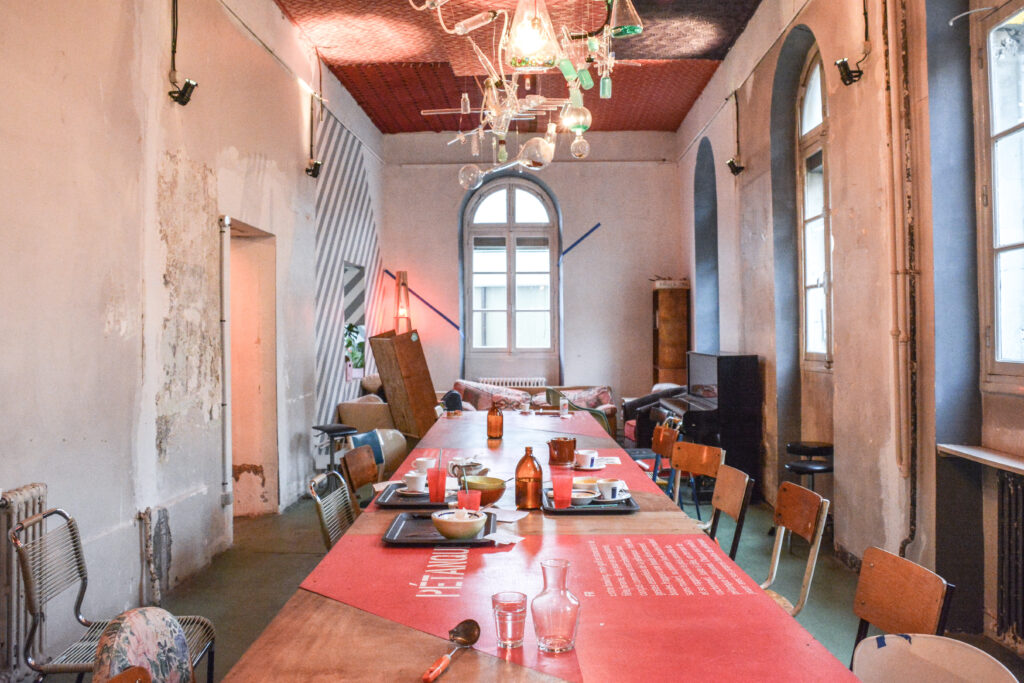 In Paris, Les Grands Voisins (The Big Neighbours) is a mixed-used ‘ecosystem’ on the 3.4 hectare site of a former hospital, due to become a new Eco-Housing district in late-2017. It is now the biggest temporary occupation in Europe, and has become a touristic attraction in Paris, with an average rate of 2000 visitors a day last summer.

In 2012, the Public Hospital of Paris moved out of one of the oldest and biggest medical centres in the city, the Hospital Saint Vincent de Paul, located in the south bank of the Seine. The Paris City Council is in the process of acquiring the site to turn it into a vast eco-housing neighbourhood but the renovation work isn’t expected to start until the end of 2017. Instead of leaving the area empty for 5 years, a coordination team formed of several bodies offered to occupy the site. They negotiated to occupy the building with no rent, which enabled them to rent workspaces at a very low-price and generate revenue from the bar and restaurant during the events in order to finance communication, event planning, furniture purchase and general building maintenance.

The first organisation on site was Aurore, a charity association offering emergency shelters and administrative consultancy for refugees and unaccompanied minors. From the site, Aurore was able to offer assistance to over 400 individuals (over several of whom were hired to work at Les Grands Voisins as part an occupational integration program). The second organisation was Plateau Urbain (Urban Platform), a small agency that negotiates with building owners in order to incentivise the temporary use of vacant spaces. In Les Grands Voisins, they manage the space and curate the temporary tenants. The third member of the coordination team is YES WE CAMP! an architecture collective from Marseille, known for their experimental camping sites in city centres. Here, they are in charge of all the furniture design and community gardens. The site is also hosting over 150 tenants, including start-ups, designers and artists studios and shops, architects, charities, which makes it a true diverse ecosystem.

The temporary use of vacant sites is interesting to explore as urban densification increases in major European cities (such as Paris and London), while other cities grapple with what to do with vacant buildings post industrial decline (such as Glasgow). It allows small businesses, charities and artists access cheap rent in central locations while benefitting the property owner at the same time through saving money via security, overheads and maintenance. Instead of having a deserted neighbourhood blocks, temporary occupation activates spaces, attracts people and raises the profile of neighbourhoods – which is valuable for its residents as well as the property owners and public bodies. The value of temporary use is becoming increasingly understood, while there are many positives there should also be discourse and clarity about the objectives of both parties so that those who are investing (time, money, cultural value) have a clear understanding of the arrangement. To go further, here is the website of Les Grands Voisins (partly in English)
Images credits: Yes We Camp!